We believe that all Angelenos deserve due process, access to healthcare, a driver’s license & a pathway to citizenship.

We believe our justice system should be focused on prevention and rehabilitation.

We believe that every voice matters.

We believe every Angeleno has the right to safe and affordable housing. 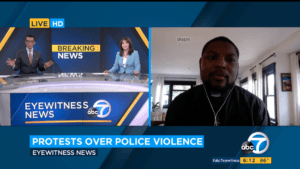 …The religious leaders have a name for their network: the Rapid Response Team. The idea is not necessarily a new one, according to Reverend Zach Hoover, executive director of the interfaith community organization LA Voice.

Hoover, 37, wasn’t an active member during the Sanctuary Movement of the 1980s when US congregations across faiths resisted federal law and provided shelter for Central Americans fleeing violence in their home countries. Many congregations offered direct sanctuary, housing the undocumented immigrants, while others offered food and legal assistance.

Each year, LA Voice wins victories that empower and improve lives. Some of our biggest victories in the past five years include:

* Helped to pass and organized for full implementation of Prop 47, which has helped thousands get their lives back on track by reducing sentences and changing records for non-violent offenders.
* Passed the Fair Chance Initiative which makes it easier for formerly incarcerated individuals to find work.
* Contributed to the passage of Prop 57, a state ballot measure which increases parole and good behavior opportunities for people with nonviolent felonies and allows judges, not prosecutors, to decide whether to try certain juveniles as adults in court.
* Played a major role in passing SB54, making California a “sanctuary state”
* Advocated the city and county of Los Angeles to invest hundreds of millions of dollars in affordable housing, and raised over a billion in funds for the homeless through our work to pass Measure HHH and Measure H.
* Increased voter turnout in low-propensity voting populations. In 2016 and 2017, our volunteers and paid phone team of formerly incarcerated voters had nearly 60,000 conversations with voters across the county.